This is a popular outrage on social media these days about how on August 15, 1947, the Indian rupee was equivalent to 1 US dollar. Sadly, this is not right. Exchanging 1 USD for INR in 1947 wouldn’t have exactly given you 1 Rupee. There were no outside borrowings on India’s balance sheet in 1947 when India obtained its independence. So the value of India Rupee was at parity with the US Dollar. Since India was under British rule, Rupee was pegged to Pounds.

The word rupee comes from rupiya or “rūpaa”, a Sanskrit word which means silver coin or wrought silver. The rupee was first issued by Sultan Sher Shah Suri in the 16th century. Sher Shah Suri (1486–1545) is commonly believed to have been adoption of the first “rupee”. The claim is judged on a per rupee ratio of 40 copper pieces (paisa).

Sher Shah Suri released a standardised silver coin named Rupiya during his brief five-year rule (540-1545). Even during the rule of the Mughals and later of British India, the currency remained in use for a very long time. Amusingly, the ruler who built the Grand Trunk Road, an aortic trade route that stretches across India, is also Sher Shah Suri.

And later continued by the Mughal Empire, Maratha era as well as in British India. Even though the history of the Rupee traces back to the Ancient India who n 6th century BC were the earliest issuers of coins in the world along with the Chinese wen and Lydian staters.

During much of the 19th century, the Indian rupee was a silver-based currency. Most of the strong economies were on the gold standard and this had a negative effect on the standard value of the currency. The rupee was subdivided into 16 annas when the British were ruling India and also during the first 10 years of independence.

Each anna was subdivided into either 4 paisas or 12 pies. So one rupee was equal to 16 annas, 64 paises of 192 pies. In 1957, decimalisation occurred and the rupee was divided into 100 naye paise (Hindi/Urdu for new paisas). After a few years, the initial “naye” was dropped.

Indian Rupee since Independence in 1947

India has undergone two major financial crises and two consequent devaluations of the rupee since its Independence in 1947. One happened in 1966 and the other time Indian Rupee got devalued was in 1991.

India also had a fixed exchange regime in 1991, where the rupee was indexed to the value of a basket of major trading partners’ currencies. Since 1985, India had begun to face balance of payments issues, and by the end of 1990 it was in deep economic trouble. The government was close to default and its foreign exchange reserves had drained up to the extent that India was barely able to fund imports for three weeks. India was facing high inflation and huge government budget deficits, as in 1966. This led to the rupee being devalued by the government.

The Indian Rupee was substantially devalued at the end of 1999.

The Indian Rupee stopped weakening and started to recover in the period between 2000 and 2007. One US Dollar ranged from Rs 44 to Rs 48. At the end of 2007, due to sustained foreign investment flows into the country, the Indian Rupee reached a record high of 39 Indian domestic rupees per US dollar. This presented problems for major exporters, IT and BPO companies based in the country who, given the rupee appreciation, incurred losses in their earnings. Lately, since the 2008 global financial crisis, the pattern has changed as foreign investors have diverted large sums to their own countries. These appreciations were mirrored in many currencies, for example, British sterling pounds, which, with the recession of 2008, had accumulated value against the dollar and then lost value afterwards.

You are now just a few steps away to get the best and the live exchange rate. Call us on 9212219191 or visit our website for further details. 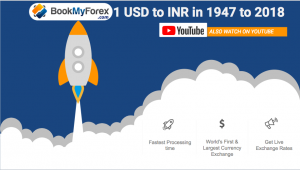