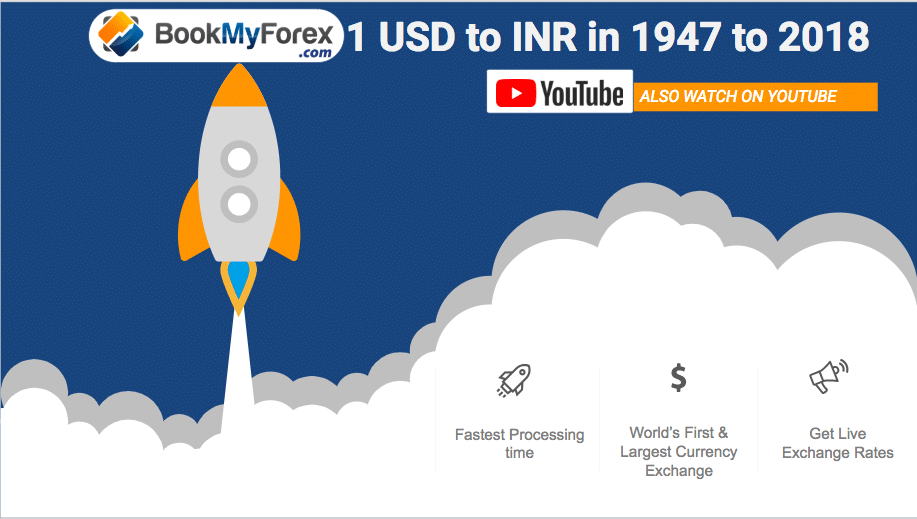 Before you read How much 1 USD to INR was in 1947, read recent USD-INR updates below and check the live US Dollar buying and selling rates in your city, by clicking here.

*Please note that all opinions, research, forecast and analysis shared in this post are provided as general market commentary and do not constitute investment advice. BookMyForex is not liable for any loss or damage, which may arise due to reliance on such information

Find out the USD-INR forecast in the video below:

In its 73 years of Independence history, India and her citizens have been quite vocal about their doubts and confusion towards the value and worth of India on the face of the global map. Be it in any or every front, and moreover, economically. None of us has had a past or maybe present where the question of knowing about the value of INR at its time of independence against USD hasn’t touched us.

Moreover, since the upliftment of the Indians through all these years, the growth of India in its education and awareness front has been commendable. Resulting in, the urge to know more about the past of India and her situations at every front. The popular outrage of Social Media that has brought citizens closer has uplifted the question that ‘How the Indian rupee was equal to 1 US dollar on 15th, August 1947” as a trend.

Breaking the monotony on this legendary question–How the Indian rupee has devalued since 1947 till date? We’ve come up with a detailed answer that clarifies the smog from this long-lived question. Honestly, it is nothing more than a myth. If you are thinking that exchanging 1 USD to INR in 1947 would have got you 1 Rupee exactly, then, sadly, that’s not true. ‘Why‘ do you ask? Here’s the answer:

Another question that arises is that —What was the actual worth of 1 USD to INR in 1947 exactly?

Although, after Independence, the Indian rupee continued to peg to the British pound at a rate of 1 rupee = 1 shilling and 6 pence what can be withdrawn from the stated that as 13 1/3 rupees per British pound. However, the sources state that British pound would have worth about 4 USD at that point of time – hence, concluding that the US Dollar would’ve been more than 3Rs then.
Don’t have time to read the whole post now: Here’s an infographic that will help you in knowing what you need to know:

Along with the confusions, there are two theories that make their fair share of rounds across the web about the value of 1USD to INR are mentioned hereunder:

As suggested the infographic shows that there were two observations that are prevalently accepted by society. However, to break the truth, that none of them is true. The correct answer to this question is that whether 1 USD was equal to 1 INR in 1947 or not * as India was under the British rule until then, and as one of the British Colonies, the Indian Currency was then pegged against Pound during 1947 where 1Pound = 13 INR in 1947 until the Independence.

Also Read: Performance of the Indian Rupee vs US Dollar and other Emerging Market currencies & How Tourism can save the day for Indian Rupee

US Dollars: No wonder, the US Dollar is one of the most popular, powerful and wanted currency in the world. It has been a central point of discussion all around the globe. As a Supreme Nation, the US dollar holds an extreme power valuing more than a fortune to many currencies. As the most powerful currency in the world, it is obvious that every country accepts it and deals moreover in it.

Its universal nature can be trusted by the testimonials –185 recognized currencies by International Standards Organization very few are traded outside their countries. Listed as one of the three most traded currencies in the world along with the Euro and Yen, the USD makes up almost 64% of the global trade, thus, concluding it to be the de-facto global currency of the world. Every Indian is excited to know the value conversions of the US dollars for all the years since its independence in 1947. It would be interesting to see the journey of the dollar to rupee from 1947 to the latest.

Are you amongst those readers from around the world who’ve asked us about the highest or the lowest value of 1 USD to INR after 1947 till date? If yes, then trust us, your search finishes right here. Go through the researched data that we at Bookmyforex.com have curated for all of you that are mentioned hereunder:

If you’ve liked the article, let us know about your views in the comments section below and share it.
Read our Quora answer: How many INR were equal to 1 USD on 15 Aug 1947?

Note: This blog post answers the frequently asked question about “the value of Rupee versus US Dollar n 1947”. We have used historical data from the research done by Prof Werner Antwelier of the University of British Columbia. The research and data can be found here. Rupee may have depreciated with respect to Dollar but has shown significant improvement against other currencies like Euro & Pound…

10 Must Know Tips For The Aspiring Solo Travelers

Everything You Need to Know About Exotic Currencies

USD To INR currency conversion: How to avoid a common travel blunder