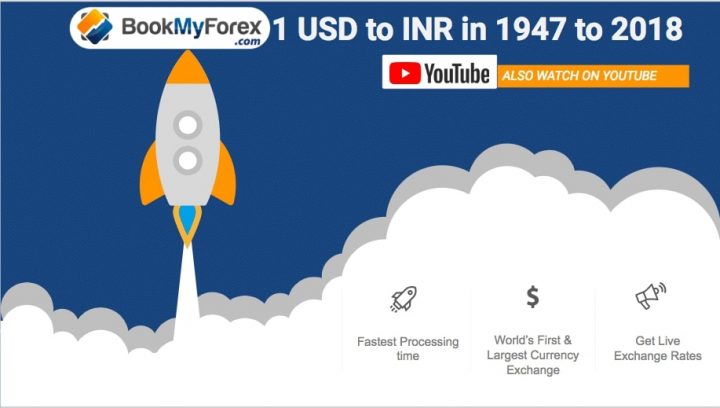 The US dollar serves as the world’s most dominant currency. Regarded as the benchmark currency, the US dollar determines the value of other currencies in the universal market.

The US dollar is also one of the most commonly used currencies in international investment and trade. Trading with the dollar is much easier than any other currency. The emergence of the dollar as an indispensable medium of exchange began after World War I placed restrictions on exchanges.

Since then, the dollar has been enjoying worldwide attention. In light of this, the Indian currency, like various others, is compared against the dollar to determine its value. But the history involved in the process of scaling the INR helps in understanding the Indian economy better.

The 1 USD to INR exchange rate has always had extreme volatility since the inception and seen plethora of fluctuations over the years. We have brought you 1 USD to INR values table ranging all the way from 1947 till date so that you can see the change in INR’s value.

Breaking the monotony on this legendary question–How the Indian rupee has devalued since 1947 till date? We’ve come up with a detailed answer that clarifies the smog from this long-lived question. Honestly, it is nothing more than a myth. If you are thinking that exchanging 1 USD to INR in 1947 would have got you 1 Rupee exactly, then, sadly, that’s not true. ‘Why‘ do you ask? Here’s the answer:

Another question that arises is that —What was the actual worth of 1 USD to INR in 1947 exactly?

Although, after Independence, the Indian rupee continued to peg to the British pound at a rate of 1 rupee = 1 shilling and 6 pence what can be withdrawn from the stated that as 13 1/3 rupees per British pound. However, the sources state that British pound would have worth about 4 USD at that point of time – hence, concluding that the US Dollar would’ve been more than Rs 3 then.

Indian currency began to be measured against the US dollar in 1947 after India gained its independence. The value of 1 INR then could be taken as 1 USD, considering that the national balance sheet was free from any credit or debit.

However, the value of Indian currency was derived from the British pound, which then was 1 £ equal to 13 INR. And owing to the absence of a standard form of currency comparison until 1944, this valuation of INR against the British pound remained dominant.

The value of 1 INR in 1947 was 4.76 (if a direct comparison is not made). This value continued till 1966. But the Indian economy started witnessing a downfall starting from the 1950s. This was on account of the country’s credit from the international market.

Rupee value fell to 8.10 in 1974 following the Oil Shock that took place in 1973 due to the decision of the OAPEC or Organisation of Arab Petroleum Exporting Countries to reduce production.

To combat the situation and the subsequent political crisis, India had to borrow foreign currency. This resulted in the fall of the Indian currency value. The exchange rate deteriorated throughout the 1980s and reached a value as high as 17.50 in 1990.

India’s economy was going through a tough time in the 1990s. Interest payment accounted for 39% of the revenue that the government collected at the time. Fiscal deficit was reduced to 7.8% of GDP, and India was on the verge of being declared a defaulter in the international market.

This crisis called for a devaluation of the Indian currency. Devaluation is a process where countries reduce the value of their currency in the international market while keeping their internal value intact. India took a similar approach to make its export market cheaper and its import market costlier.

INR value since 1992- the effect of Devaluation

The value of INR is largely related to crude oil prices. As oil price increases, the value of Indian currency also decreases, and vice versa. The withdrawal of foreign investors from the Indian market is another contributing factor. Government debts can cause investors to lose interest in the country’s market, resulting in inflation. Factors like these may combine with several others to cause further depreciation of the INR in the future.

USD to INR Analysis for 2021: Is Asia’s worst performing currency of 2020 headed for strength?