The Canadian dollar is the official currency of Canada. The symbol is $ and the currency code is CAD. In French CAD is called dollar Canadian. Since a lot of countries’ currency is called Dollar, and in order to differentiate it from those currencies, it is written as Can$ or C$. Canadian Dollar is also known as Loonie because of the image of a loon on the one-dollar coin and huard in French. Canadian Dollar is the fifth most held reserve currency in the world after USD, EURO, Yen and GBP.

From Canadian Pound to Canadian Dollar

During the mid-18th century, Canadians were debating whether to adopt a sterling monetary system or a decimal monetary system based on the US dollar. The British Empire preferred the use of Sterling Pound throughout its empire but the British North American Provinces preferred Dollar because of the trade relations and the close proximity to the United States. In 1841, Canada adopted a new system based on the Halifax rating. The new Canadian pound was equal to four US dollars, making one pound sterling equal to 1 pound, 4 shillings, and 4 pence Canadian. Thus, the new Canadian pound was worth 16 shillings and 5.3 pence sterling.

India got its independence from the British Empire in 1947. Indian Rupee replaced the British Empire currency and was pegged to US Dollar in 1966. Canada shares historical trade and bilateral relationship with the US which means any change in the US Dollar has an effect on the Canadian Dollar. 4% of the Canadian population identify themselves as Indians. This number is huge which means a lot of people movement happen between Canada and India. Because of this flow, conversion of CAD to INR is significantly high, even on par with Pound and Dollar.

This also gives rise to the question about the value of 1 CAD to INR in 1947 and how much change has this CAD to INR conversion happened over the years. Since both CAD & INR are pegged to USD and any changes in USD means changes in CAD & INR. But Indian currency went through a couple of devaluations, fought 3 wars and had to deal with 2 economic crisis which would have had an impact on the historical exchange rates of 1 CAD to INR. It is worth to mention that Indian Rupee performed brilliantly against USD during the 2005-09 period and the Canadian dollar’s value against the U.S. dollar also rose sharply in 2007 because of the continued strength of the Canadian economy and the U.S. currency’s weakness on world markets. 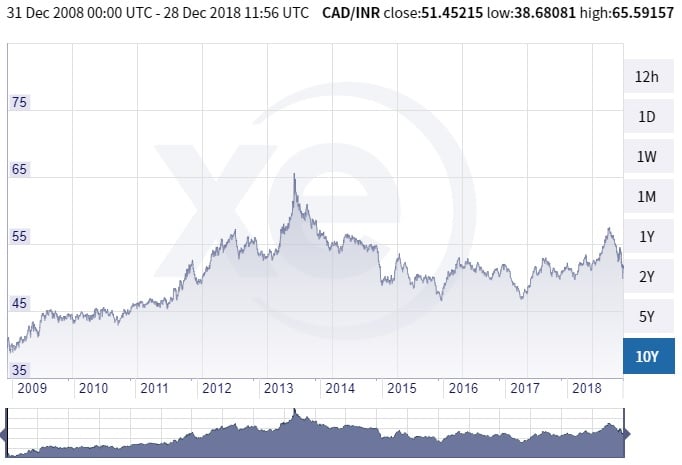