At present, forecasting trends for all ASEAN (Association of South-East Asian Nations) currencies for 2020 is basically trying to forecast the impact of the Coronavirus. All ASEAN currencies dropped sharply over the last month as the virus spread disrupting not only Yuan and the Chinese economy, but also the ASEAN economies as they are dependence on China is huge. China is their main trading partner as well as ann export market and also the impact falls on the tourism sector as Chinese are the largest group of visitors to these countries.

The Singapore Dollar (SGD) traded in a band of 1.3480-1.4088 against the US Dollar since 20th February 2019 till date against the US dollar. The first few months the currency was under pressure as the US-China trade war put pressure on the ASEAN currencies and SGD fell steadily through the year.

However, the fall seems to be climaxed on 20th. Feb 2020 when SGD fell to the years’ low of 1.4088 as Yuan collapsed above 7.0350 on renewed fears of the larger negative impact of the virus after Apple announced that they are cutting down their manufacturing and sales figures for the rest of the year.

Apple, like nearly all major tech companies, has manufacturing units in China which are currently closed because of the virus and that apart, China is one of the major markets for their products. Fears that there will be similar announcements from other major tech companies led to a swift fall of Yuan from 6.98 to 7.0350/7.04.

Yuan’s sharp drop led to similar large losses in ASEAN currencies including Singapore Dollar and we expect these currencies to drop further if the impact of the virus continues over the next few months. We expect USD to SGD to trade in a wide 1.34-1.44 range for the rest of the year but a slide could be steady and as we expect the central bank of Singapore to smoothen the fall.

Profile and History of Singapore Dollar

Singapore Dollar is the official currency of Singapore and also abbreviated as SGD in the international currency exchange markets. The Singapore dollar is made up of 100 cents and is often presented with the symbol S$ to set it apart from other dollar-based currencies.

Let’s look at the 10 years SGD to INR chart to examine and understand any major trend in the currency pair and relative stability of the Indian Rupee against the Singapore dollar. 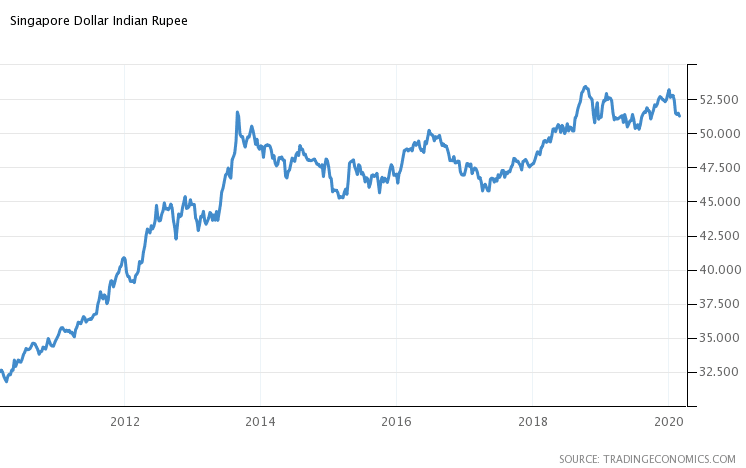 As you can see from the graph of SGD to INR exchange rates, the Singapore Dollar has been quite a volatile currency against the Indian Rupee in the last decade trading in a wide band of 32.50 to 52.50. The Singapore currency had witnessed a major uptrend against the INR in the first half of the decade i.e in the 2010-15 period. The SGD to INR exchange rate increased from about INR 32.50 level in 2010-11 to a peak of 51.50 in late 2014.

However, the Singapore dollar slightly corrected against the Indian Rupee in 2015-16 and traded in a narrow band thereafter. The SGD has been trading majorly in the 46 to 52 range for the most part of the last 5 years which gives the currency relatively a stable outlook in the later half of the last decade.