The New Zeland Dollar (Kiwi) is expected to remain weak around levels of 0.60-0.6650 to the US dollar this year perhaps moving a touch higher at the end of the year. The 4 most likely reasons the NZ dollar will remain weak at current forecast levels:

Further, Chinese slowdown due to the coronavirus will be another major negative for the Kiwi, though not to the same extent of the impact on Aussie Dollar. New Zealand’s exports are mainly dairy products, demand for which in China will rise quickly once the virus starts to be a slowdown. The recovery in demand for these products is much faster than in the case of metals and other commodities and thus the rebound in Kiwi exports could be faster.

Like in the case of other Asia-antipodean currencies, it will be difficult to forecast the impact of the virus on China and hence its fallout on its major trading partners. If the Chinese slowdown continues longer than expected, the pressure on Kiwi will increase as domestic demand in New Zealand is likely to remain subdued. We would, therefore, look for opportunities to sell the New Zealand Dollar on any recovery to higher levels in the near future.

New Zealand currency has had a long history of over 160 years. In fact, during the 1800s, New Zealand used their coins and banknotes before British currency was even legal currency. However, nothing was made official until 1933, when New Zealand issued their first official coins, based on the British pound, shilling, and pence.

It was in 1934, the Reserve Bank of New Zealand was established which became the sole supplier of the New Zealand currency. However, it took nearly 30 years before the Reserve Bank replaced the currency of pounds, shillings, and pence with actual dollars and cents. In the year 1967 alone, the Bank printed 27 million new banknotes and 165 million new coins.

Currently, New Zealand operates on flexible exchange rate system but it was only through a series of changes till 1985, the New Zealand Dollar which was earlier pegged against US dollar at a fixed rate moved to float freely.

Interestingly, the New Zealand government has produced polymer or plastic versions of the New Zealand dollar since 1999, which has made the note more secure against counterfeiting.

Let’s look at the 10 years NZD to INR chart to examine a major trend and overall stability of the New Zealand dollar viz a viz the Indian Rupee. 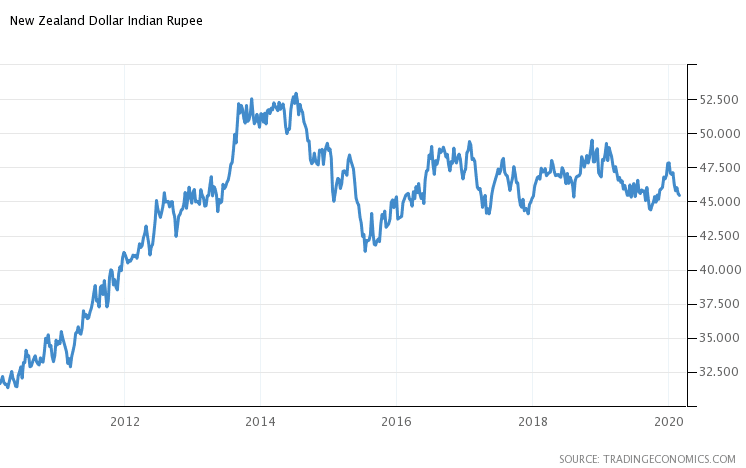 As you can see from the graph of NZD to INR exchange rates, the New Zealand Dollar has been quite a volatile currency against the Indian Rupee in the last decade. The Kiwi currency had witnessed a major uptrend against the INR in the first half of the decade i.e in the 2010-15 period. The NZD to INR exchange rate increased from about INR 30 level in 2010-11 to a peak of 52.50 in 2014-15.

However the New Zealand currency corrected further in 2015-16 and traded in a narrow band thereafter. The New Zeland dollar has been trading majorly in the 45 to 49 range for the most part of the last 5 years which gives the currency relatively a stable outlook in recent times.