Singapore’s Passport is the Most Powerful Passport of 2017

Most Powerful Passport 2017 is Singapore’s Passport. India is at 75th position

According to the global financial advisory firm Arton Capital which has published the ‘Global Passport Power Rank 2017’, Singapore has the most powerful passport in 2017. Germany is ranked second, followed by Sweden and South Korea in third place. European passports always topped this list. But this year Paraguay removed the visa requirements for Singaporeans. That propelled their passport to the top of the ‘Most Powerful Passport 2017 List’. It was the first time ever when an Asian Country’s passport topped the list. Indian Passport figures at number 75 with a Visa Free score of 51.

Visa Free Score: Visa Free score is a method used to calculate the ‘value’ of a passport. It is the number of countries that allow the holder of that passport entry into their country without requiring a visa.

Most Powerful Passport 2017-Indian Passport is at 75th position

Indian passport ranked 78th last year but this year has improved the ranking. Indian passport figures at 75th position in the Most Powerful Passport list with a visa-free score of 51. With your Indian passport, you can travel to 51 countries without requiring a visa. 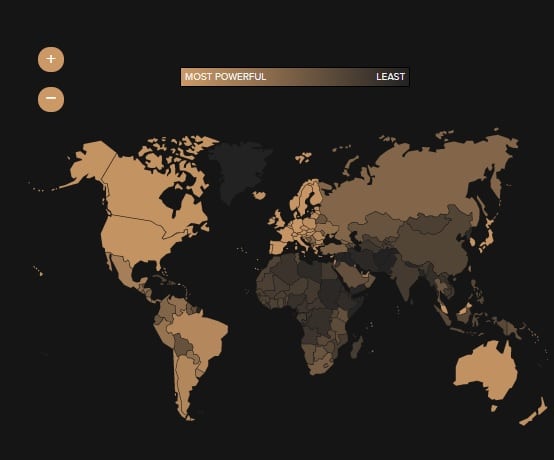 No surprises when it comes to the least powerful passports. Afghanistan’s passport is at last place on the list with a rank of 94 and a visa-free score of 22. Pakistan and Iraq are jointly at 93 with a score of 26. The turmoil hit Syria is at 92, having a score of 29 and Somalia at 91 with a score 34.

Surprisingly the value of US passport is in decline ever since President Donald Trump took office. One of the reasons behind this decline was the recent revoking of visa-free status to US Passport holders by Turkey and the Central African Republic.

Passport Index has become the most popular interactive online tool to display, sort and rank the world’s passports.
The index ranks the national passports of each country by cross-border access they bring. So each passport gets a “visa-free score” which means the number of countries a passport holder can visit visa-free or with visa on arrival. Higher this number, more powerful the passport.