At present, forecasting trends for all ASEAN (Association of South-East Asian Nations) currencies for 2020 is basically equivalent ro trying to forecast the impact of the Coronavirus. All ASEAN currencies dropped sharply over the last month as the virus spread disrupting not only Yuan and the Chinese economy, but also the ASEAN economies as they are dependence on China is huge. China is their main trading partner as well as ann export market and also the impact falls on the tourism sector as Chinese are the largest group of visitors to these countries.

MYR had a similar dramatic fall over the last 12 months, dropping from a high of 4.0440 to a low of 4.2245 and is currently trading around 4.18 against the US Dollar (USD to MYR exchange rate). Like most other ASEAN economies, the Malaysian economy is also dependent on China for a major part of its exports and the negative impact of the corona-virus will hurt it equally.

A smaller problem for their exports is that their recent foreign policy differences with India have led to nearly a total export ban of Palm Oil to India who was a major buyer. Malaysia is also an exporter of crude oil with exports totalling about $8 bio and lower crude prices could also impact the Malaysian economy negatively.

The crude exports represent around 7% of their total exports and the negative impact might not be large. With economic growth likely to slow down due to the slowdown in China this year, we expect the Ringgit to remain under pressure and expect a range of 4.12-4.25 (USD to MYR exchange rate) is likely to contain most of the movement in the currency in the year 2020.

Earlier Malaysian Ringgit was a free float currency but during the East Asian Crisis Period (1997-1999) in which it witnessed sharp depreciation, the central bank of Malaysia pegged the ringgit exchange rate against the US dollar in September 1998 fixing its exchange rate at 3.80 Malaysian Ringgits per US Dollar. However, MYR remained floating against other currencies. It was only in July 2005, Bank Negara Malaysia announced the system of pegged exchange rate soon after China’s announcement of the end of renminbi peg against the USD.

Let’s look at the 10 years MYR to INR chart to examine and understand any major trend in the currency pair and relative stability of the Malaysian Ringgit against the Indian Rupee. 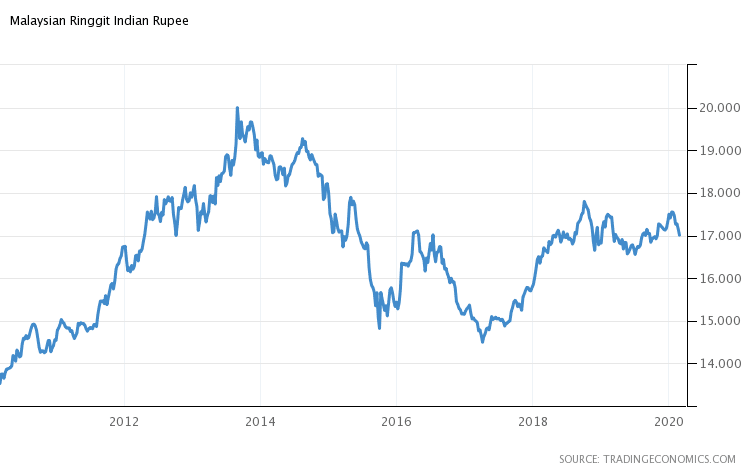 As you can see from the graph, the MYR to INR exchange rate has been quite volatile during the last decade and traded in a wide band of 14 to 19 levels. If you look at the first half of the past decade, the Malaysian Ringgit was consistently on an appreciating trend like other major ASEAN currencies. The MYR to INR exchange rate increased from 14 to 19 between 2011 and 2014 which is a sharp depreciation of rupee as had to pay more to buy a Malaysian Ringgit.