The Canadian Dollar’s fortunes in 2019 were dominated by the trans-Pacific trade war between the United States and China, a dispute in which Canada’s resource economy has a large interest but virtually no say. The United States-Mexico-Canada Agreement (USMCA), which Congressional Democrats have agreed to pass after delaying for a year, as developments having the potential to free the US and Canadian economies from the concerns that have crimped growth for the past year. will the two economies respond to the political and trade improvements, particularly the business sector investment revival, the question would go a long way to determining the economic outlook for the year. There should be sure indications by the end of the first quarter.

Prime Minister Justin Trudeau’s Liberals held on to power in the October Federal elections while losing the popular vote to the Conservatives. Finishing with 157 seats, 13 seats short of a majority but far ahead of the Conservatives at 121, Trudeau’s minority government will depend on votes from the New Democratic Party’s 24 members, or the Bloc Quebecois’ 32. Prime Minister Trudeau’s priorities for his second term – climate change, expanding healthcare and gun control – do not have a specific economic focus though he also promised lower taxes and expanded trade.

Liberal governance will fall only when major legislation, such as a budget fails to pass Parliament. The Trudeau government’s first real test is likely to come in February or March when it presents its first minority budget. Major support and resistance levels for the USD to CAD are where they have been for the past two months. The first support line is at 1.3050 with a band to 1.3018, the low in October 2018. There is another strip at 1.2900-1.2880 the reach of several lows late from August to mid-October 2018. Below that are the lows in October and May 2018, 1.2800-1.2760.

Finally, there is a support line at 1.2550, the two-year low from April 2018. Above the current level of 1.3300, there is mild resistance at 1.3330-1.3350 and thereafter between 1.3475 and 1.3500 are a series of levels that marked the top from late April to early June. Though pierced numerous times the Dollar Canada only closed above the upper limit at the very beginning and the very end of the period. The next resistance is minor at 1.3525 just above the May high close.

The Canadian dollar is the official currency of Canada which is also abbreviated as CAD in the international currency exchange markets. To distinguish CAD from other dollar-denominated currencies, it is also represented as C $ to CA $. Accounting for approximately 2% of all global reserves, the Canadian dollar is the fifth most held reserve currency in the world.The other four global reserve currencies are the US dollar, the Euro, the Yen and the Pound sterling. As per a report, about 3 lakh Indians visited Canada in 2018 only which was the highest number of people travelling to Canada from the entire Asia-Pacific region.

Also Read: How to get the best Canadian Dollar rates?

Since oil has been one of the major components of the Canadian export basket, the movement in the price of crude oil has a direct impact on the Canadian currency. Also, since the US has been a major trading partner of Canada, the development in the US and the US-Canada trade environment also impacts CAD-USD exchange rates.

Let’s look at the 10 years CAD to INR chart to examine a major trend and overall stability of the Canadian currency. 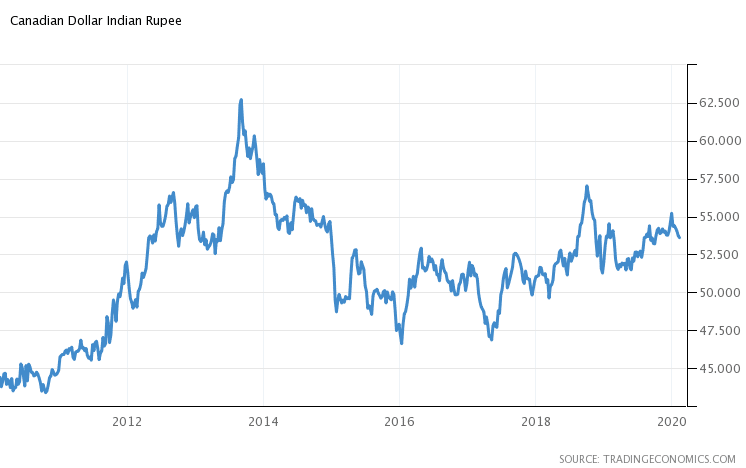 As you can see from the chart, CAD to INR exchange rates has remained in 42 to 62 range in the last 10 years which is really broad. However, much of the volatility in the CAD to INR exchange rates is seen in the year 2013-14, the time when India was facing external account problem. So the volatility in this period is more because of domestic issues causing weakening of the rupee.Otherwise, a post that period the CAD to INR exchange rates have remained in a relatively smaller range of 47.50 to 54. If we have to look at the Canadian Dollar forecast in 2020 from the perspective of market expectations, research agency Credit Suisse expects the Canadian dollar to struggle in the year majorly because of Bank of Canada’s consistent dovish stance.