It’s a well-known fact that when China sneezes, Australia gets a cold. The commodity-producer country depends on its Asian neighbour to keep its economy alive, as most of its exports end up being shipped to China. The trade war between Beijing and Washington took its toll on the Australian economy, hence on AUD to USD, which fell to a one-decade low of 0.6670 back in October 2019.

Quite a slump considering the pair topped at 0.8135 in January 2018, shortly before the trade war started. It is hard to tell whether the Reserve Bank of Australia was more concerned – back then, or now. Indeed, policymakers needed the Aussie to be cheaper, but not at the cost they finally had to pay.

The Australian economy grew a seasonally adjusted 0.4% in the third quarter of 2019 – below the 0.6% of Q2 and missing the market’s expectation. Throughout the three months leading to September, government spending eased and household consumption expanded at its weakest pace since the global financial crisis.

The annual rate of growth stands at 1.7% according to the latest available data. The employment sector in the country is far from healthy and that has actually been the catalyst that pushed the RBA to cut rates to a record low of 0.75%. More rate cuts are in the docket for 2020, which means that AUD to USD may not have yet seen a bottom.

Sluggish wages’ growth has been a drag since December 2013, entrenched to a 2%-3% range, one point below the previous decade’s average. In fact, according to the latest data, wages’ growth is closer to the lower end of the range than to the top of it, in spite of the three rate cuts the RBA delivered this year.

On top of all this outbreak of the Coronavirus and the resultant slowdown in China will impact the Aussie economy greatly this year. The Aussie which has dipped to a low of 0.6662, near levels last seen in 2009, has the potential to drop further towards the 0.6575 level if the impact from the virus stretches well into 2020 and lead to a large slowdown in China. Commodity prices, which are a main accelerator in the Aussie economy, could drop lower if demand remains tepid unless the global economy picks up towards the second half of this year.

We remain bearish on the Aussie Dollar and see a trading range of 0.6525-0.6900 (AUD to USD) this year with higher chances of consolidation in the lower half of the band. Converting the band to AUD to INR range at constant USD to INR prices, the forecast range for AUD to INR for the year 2020 comes out to be between 46.20 and 49.23.

Australian Dollar is the official currency of Australian. Australian Dollar is also used as a legal tender in its extended territories which include Norfolk Island, Christmas Island and Cocos (Keeling) Island. The Australian currency is also abbreviated as AUD and symbolically represented as A$ or AU $ in the international currency exchange markets. If you look at the subdivision, one Australian dollar is further subdivided into 100 cents. AUD is the fifth most traded currency in the world and still considered as one of the most volatile currencies in the G-10 group of nations.

Australian is one of the top sought destinations for Indians planning to travel abroad. About 3.7 lakh Indians visited Australia in 2018 which is expected to shoot up to 5 lakh in FY 2019. Apart from that, a lot of Indian students visit Australia for higher studies purpose. Therefore, India records a high demand for INR to AUD as well as AUD to INR conversion.

The history of Australian Dollar traces its origin in the history somewhere around 1813 when first coinage was issued in Australia, a British colony at that time. It was in 1817 when the Bank of New South Wales was established which issued banknotes denominated in pounds.

The first series of Australian Dollar notes were issued only in 1913 which were based on the old British sterling system. When Australia was part of the fixed-exchange sterling area, the exchange rate of the Australian dollar was fixed to the pound sterling at a rate of A$1 = 8 U.K. shillings which means 2.50 AUDs were equivalent to 1 British Pound.

However, the decimal currency (coinage) was issued later in 1966 when the dollar and the cent replaced pounds, shillings and pence. Australia pegged the Australian dollar to the United States dollar at a rate of A$1 = US$1.12. In 1996, to prevent counterfeiting of currency, paper-based notes were converted to polymer-based notes which is also called plastic currency.

Let’s look at the 10 years AUD to INR chart to examine major trend and overall stability of the Australian currency. 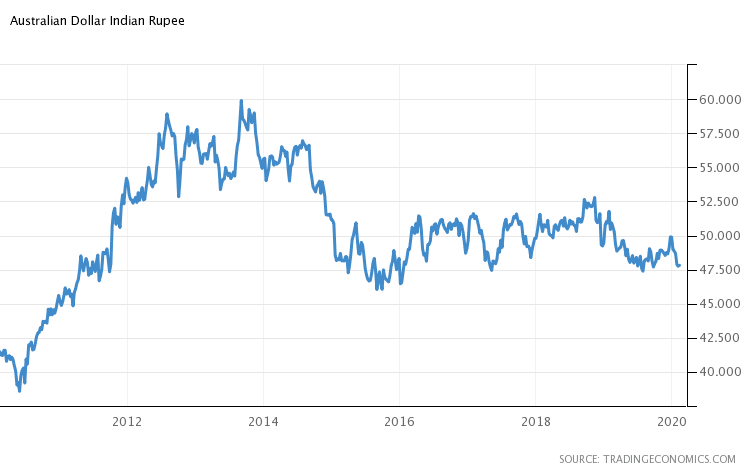 As you can see from the chart, AUD to INR exchange rates has remained in 38 to 48 range in the last 10 years which is really broad. The range and the chart, therefore, justifies the fact that the Australian dollar has been one of the most volatile currencies in the world.

However, if you see post-2016 AUD to INR exchange rates, the Australian dollar has traded in much narrower range of 47.50 to 52.50 in the last 3 to 4 years. It tells that the Australian currency has remained quite stable in last 5 years in the international currency exchange market compared to the previous 5 years.